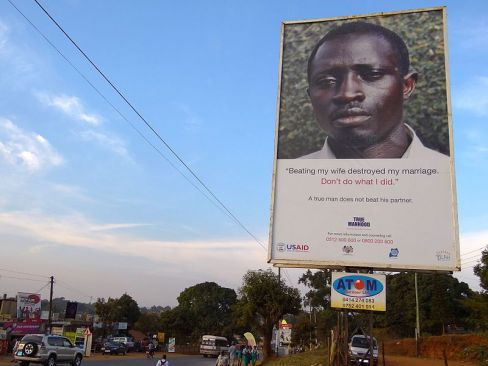 Violence against women and girls is perhaps the most widely spread and socially tolerated form of human rights abuse in Uganda and around the world. It includes domestic and sexual violence, forced and early marriages, bride price-related violence, widow inheritance, and female genital mutilation. However, in many communities in Uganda, when a man beats his wife, neighbors and close family members often ignore the situation because they consider it a private matter. Others see it as a sign that the man cares about his wife.

Violence against women and girls results from a complex interplay of individual, family, communal, and societal factors. In today’s hierarchy of social power, men hold a higher status. Husbands, male partners, and even male relatives use violence as a way of imposing their will over women. Much of the violence is justified by, and perpetuated as, “tradition” or “culture.” Children observe and internalize these behaviors, learning that violence is an acceptable means of getting their way, thereby perpetuating an intergenerational cycle of violence.

In many parts of sub-Saharan Africa, and in Uganda in particular, customary practices rule the day and subject many women and girls to discriminatory conventions in their daily lives. For many Ugandans, laws, including those targeting violence against women and girls, do not have any practical impact. The issues that increase women’s vulnerability to violence are most often the same as those governed by customary law: marriage and divorce, inheritance, child custody, or family disputes. Rarely does customary law, which is often based on patriarchal values, act in women’s best interest. While statutory law protects women from discrimination, including violence from their partners, it is not enforced. Women are unaware of, and therefore are unable to use, the provisions of the law to claim their rights.

In addition to customary law, poverty also creates the conditions for violence against women and girls. Poverty is widespread in sub-Saharan Africa, with the majority of the population living in rural areas. Violence keeps women in poverty and poverty keeps women exposed to violence. Various studies indicate a strong link between a household’s socio-economic status and risk for gender-based violence. The unequal power relations between men and women also leads to women’s lack of access to land and other income-raising resources.

Women who have experienced violence are up to three times more likely to be infected with HIV; figures from 2006 indicate that women comprise 59 percent of those living with the disease in sub-Saharan Africa. Women who attempt to negotiate safe sex practices are vulnerable to violence. Those women are more likely to be subjected to violence when they disclose their HIV-positive status.

Despite the violence that women and girls experience, they contribute in important ways to the well-being of their countries and families. In rapidly changing economies in Africa, women fill key gaps in employment. Women find ways to earn and increase their income, secure health care for all family members, and provide education for children. The new roles that women and adolescent girls are taking on represent an opportunity for transformative shift toward gender equality.

The field of preventing violence against women and girls is rapidly growing and providing opportunities for addressing a widely tolerated injustice. Programming organizations are working closely with researchers to establish the most effective interventions. Some available evidence indicates that interventions to address these types of violence have to be designed at multiple levels in order to challenge the underlying beliefs that define the range of acceptable male and female behavior while breaking the acceptance of violence against women and girls in public and private life. Undermining the legitimacy of this violence can pave the way for informal sanctions against men who abuse their partners. Interventions that have shown promising practices include the following:

Gender transformative programming effects changes in the attitudes, beliefs, behaviors, and practices of men and helps break social acceptance of violence against women. One such program is SASA!, implemented by the Center for Domestic Violence Prevention in Uganda. The SASA! Activist Kit for Preventing Violence against Women and HIV is a community mobilization intervention that seeks to change community attitudes, norms, and behaviors that result in gender inequality, violence, and increased HIV vulnerability for women. SASA! is an acronym for the phases of the program: Start, Awareness, Support, and Action. In the Start phase, community activists and staff from institutions like the police and health facilities are trained in issues of violence, power, and rights. These leaders then carry out the next three phases of the program through informal activities in their local networks using four strategies: local activism, media and advocacy, community materials, and training. All activities and materials focus on critically analyzing power inequalities and encouraging positive behavior change.

Women’s economic empowerment programs need to integrate participatory training on understanding gender, HIV, domestic violence, and sexuality to the activities of an existing group lending and savings scheme. Key programs include Intervention with Microfinance for AIDS and Gender Equity (IMAGE ) in South Africa.

Social norms marketing and edu-tainment efforts include the creative use of media and entertainment culture together with strategies to encourage dialogue to reinforce social change messages at a community level. Key programs include Sexto Sentido/Puntos de Encuentro in Nicaragua, Soul City in South Africa, and Breakthrough in India.

The U.N.’s Sustainable Development Goals, which came into effect this past January, recognize that gender equality and women’s empowerment are prerequisites for development. The main targets for the fifth SDG—gender equality—are to end all forms of discrimination against women and girls everywhere as well as to eliminate all forms of violence against, and exploitation of, women and girls in the public and private spheres. Successful programming should involve multi-pronged community interventions that aim to shift norms around the acceptability of men’s use of violence toward women, challenge gender roles that grant men power over women, reduce harmful drinking, and, most importantly, work with both men and women, as well as girls and boys, to encourage new models of equitable relationships and more flexible gender roles. Given the urgency of the issue and the possibilities we have, the time to act is now!