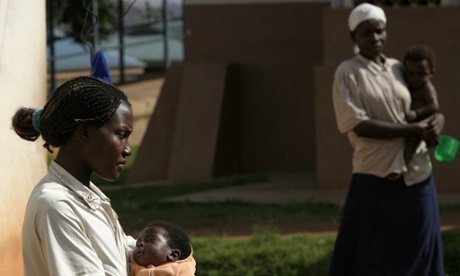 ‘Beating your wife is a sign of love’ – changing norms to end domestic abuse.

Could a new approach change engrained norms in Kampala, where almost half of all women have experienced violence?

Domestic or partner violence is a global concern. Worldwide 30% of partnered women will experience physical or sexual violence in their lifetime. Various measures such as legislation, survivor or victim support services, and individual counselling have ameliorated some of the impacts of violence but how can violence be prevented in the first place? As we learn more about the multiple health and development impacts of violence, the need for effective prevention becomes increasingly urgent.

Take the city of Kampala for example, where almost half of women have experienced partner violence. “Men need to use violence to discipline their wives,” is a common view. “A man beating his wife is a sign that he loves her,” is another. Yet it is here, in three Kampala parishes, that a community mobilisation project called ‘Sasa’ has been changing attitudes and reduced levels of physical partner violence. Women in Sasa communities were half as likely to experience violence in the past year as women living in control groups.

Sasa, which means ‘now’ in Kiswahili, is an acronym for the four phases of a systematic process – start, awareness, support, action – designed to move communities from an initial contemplation of what constitutes violence through to shifts in norms.

It was developed by a Ugandan NGO Raising Voices to prevent violence against women and reduce the associated risk of HIV infection.

Female vulnerability to violence and HIV is, in part, the result of underlying norms that promote men’s dominance over women, limit a woman’s power to refuse sex or negotiate condom use, and maintain women’s inferior political and economic status. It is these norms and the power imbalances between women and men that Sasa seeks to change.

Violence does not happen in a vacuum but within the context of a relationship and within a community where specific norms prevail. To prevent violence, the project supports individuals, institutions and service providers to challenge instances when abuses occur in their communities. Violence prevention work has often focused on small group-based activities, but the Sasa approach mobilises whole communities to address the issues.

Power is crucial to the Sasa approach. “If we invited people to discuss ‘gender’ or ‘domestic violence’, three women might show up. Because we focus on power, everyone is interested – men too,” says Tina Musuya, head of Centre for Domestic Violence Prevention, the NGO implementing Sasa. Most people remember an occasion or relationship where they felt powerless. Debate on positive and negative uses of power helps people to appreciate the potential benefits of change.

The key to Sasa’s success is that it is delivered by familiar and trusted individuals within the community. Regular men and women – community activists – are selected and trained to conduct activities in their own networks, engaging families, friends, colleagues and neighbours. Local governmental, institutional and cultural leaders, police officers and healthcare providers also receive training. Sasa activities are not fixed but, rather, develop and evolve in response to community priorities, needs and characteristics.

As a result of action on all these levels, community members are exposed to Sasa ideas from diverse sources in their daily lives. They might attend a community drama, hear about them when consulting a traditional marriage counsellor, chat with a Sasa activist on the bus, or, if personally affected by violence, receive sympathetic support from others. Men may be reached by an activist chatting in the local bar, while women can choose single-sex discussion groups.

Raising Voices invited a team from the London School of Hygiene and Tropical Medicine to evaluate the project. Between 2007 and 2012, the evaluators conducted a trial in eight communities in Kampala, four Sasa communities and four designated comparison communities. In just under three years, Sasa communities were less accepting of violence, reported approximately half the level of physical partner abuse and half the level of multiple sexual partnerships among men. And encouragingly, the diffusion model worked: impacts were seen across the community and not only among individuals who reported high levels of contact with the programme.

As well as benefitting communities in Kampala, Sasa provides a methodology that can be adapted to different places. It is currently being used by over 30 groups and replicated in 15 countries. There is a lot still to learn, but Sasa confirms that as well as well as dealing with the impacts of violence, there are successful ways to deal with the norms that lead to violence.Save