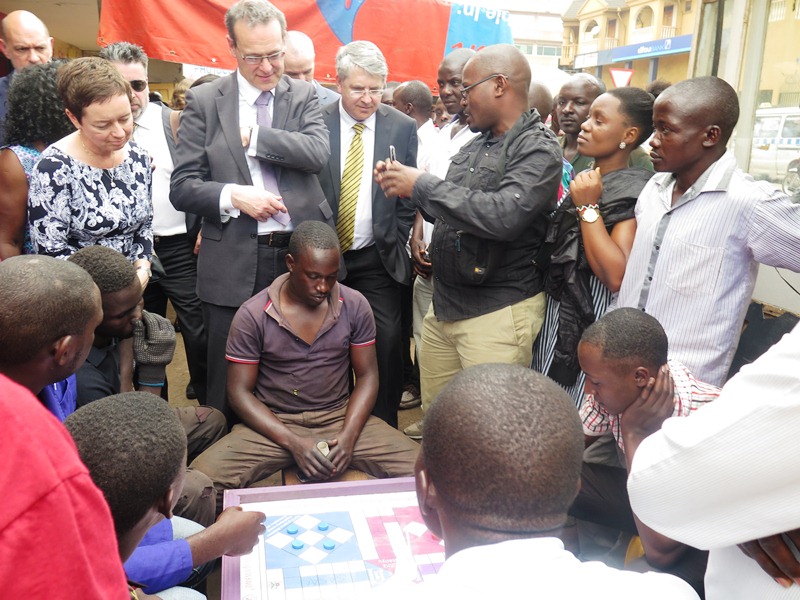 CEDOVIP hosts ministers from United Kingdom and Ireland for firsthand experience of SASA IN ACTION!

On July 3, 2017, CEDOVIP hosted the DFID Country Director, Jennie Baryl and the Irish AID Secretary General Niall Burgess to Nsiike II zone, Ndeeba parish, Rubaga division division the former SASA! study control communities in Kampala where CEDOVIP is replicating SASA!. On arrival, they were welcomed by the CEDOVIP team and the community activists. Some of the activists had a chance to share their stories of change and what motivated them to join the activism against domestic violence in their communities. One of the activists shared that he was tired of the violence and decided that he had to do something to foster positive change in his life and other community members lives.

The team was then led to the Ludo game; one of the ways in which SASA! Engages men in a fun but focused and provocative yet respectful in very deep conversations on domestic violence and creation of violence free relationships. The men then commit on to actions that they will do to create violence free relationships in their lives and their peers lives such as: respecting the women in their lives by making decisions together and being transparent about their income, informing their spouses about their property such as land leaving them capable of defending it and using it for the family after their passing.

It was clear that the informal way in which activists reach out to people in their comfortable spaces aids in the creation of a safe spaces to positively talk about difficult and gender sensitive issues among their peers.

The team then proceeded to the SASA! drama activist group where the drums and dances helped mobilize the community members. After the well-choreographed dance, the participatory drama show was set to begin. The drama was themed around the connection between violence against women and HIV/AIDS on the SASA! awareness phase. It depicted a wife confiding in a friend of her fears of revealing to her husband her positive HIV/AIDS status. The facilitator of the drama show discussions would freeze the act and prompt the audience with questions that would help open up a discussion that help community members reflect on the dangers of domestic violence and the spread of HIV/AIDS.

Some of the prompted questions included: “Why do women sometimes fear to talk about their positive HIV/AIDS status with their partners? How can community members support women experiencing domestic violence when they disclose their positive HIV/AIDS status. The open market space in Nsiike is a railway line. Half way through the drama show, the train was scheduled to pass through but the drama show must go on! The drama activist went on with their show and the community members were engaged including the children who seemed to identify the ridiculous reactions of the husband through their roaring laughter. Overall the facilitator emphasized that men’s use of power over women places women at risk for violence and contracting HIV; women who are HIV positive are at a higher risk of experiencing violence.

In his remarks the DFID Country Director Uganda, applauded the collaboration between IrishAID, DFID and CEDOVIP(Uganda). He cautioned the boys and men to go home and treat women right! It was an opportunity for the partners to view first-hand the impact of SASA in a community. We are happy to be have hosted our distinguished partners to our SASA! work. See more in pictorial