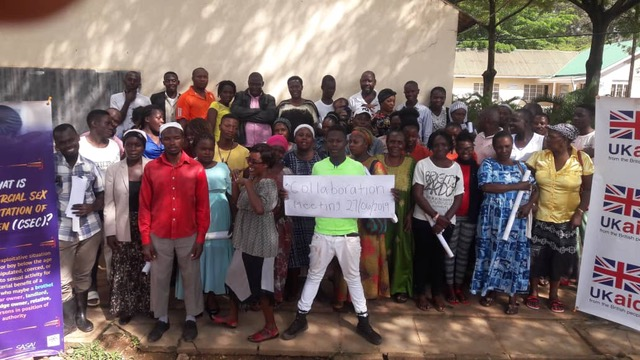 Collaboration Meeting with All CSEC Teams in Makindye

Community Activists (CAs), Local Councils (LCs), Sengas, and drama groups have been working hard to prevent Commercial Sex Exploitation of Children in Makindye. On 27th June 2019, CEDOVIP and all the CSEC teams from Makindye met for a collaboration meeting to strengthen collaboration among the different teams for effective prevention work. The meeting was also meant to strengthen the CAs understanding of the referral directory and how to make appropriate referrals for VAW/G and CSEC survivors.

The meeting was led by Olive Nabisubi, a program officer in charge of the SASA! work in Kampala. Members discussed the actions that they agreed on at their previous collaboration meeting before moving on to their successes and challenges when addressing VAW/G and CSEC in their communities. Some of the actions agreed on included: CAs working with drama groups, Sengas, and LCs to support mobilizing community members to participate in weekly VAW/G prevention activities; CAs working with Police to strengthen Police response to VAW/G and CSEC; leaders referring domestic violence and CSEC cases to LCs, Police, Probation and Welfare Officers, and Magistrate Court; and members avoiding political differences and upholding respect for all in order to build a strong team with fellow activists and community members.

Some of the key successes that members talked about during the meeting are the improved relationship between the Police and activists. Teams have been able to work together in preventing VAW/G and CSEC better and the community is now more willing to listen to them since they are more familiar with them, making their efforts more effective. They also discussed how community members are now more willing to report cases of VAW/G and CSEC since the response has improved. Before, community members had a hatred for Police for not handling VAW/G cases properly, but now they have trust and confidence in Police due to CAs following up with Police to ensure that cases are handled well. One of the key challenges they face with Police, however, is political differences. Police narrated how, if the offender of a VAW/G or CSEC crime is a strong politician, their supporters are very protective of them and don’t cooperate in the investigation. Sometimes the supporters even threaten others not to comply, further preventing justice.

The members described how their training on how to make referrals helped them to be more productive because, before the collaboration training, they were struggling to make appropriate referrals. They were referring survivors to the wrong groups, didn’t know who to work with in their communities, and wouldn’t go further than medical help with their support. Their new knowledge allows them to successfully support survivors of violence better.

Activists meet once every month to track key achievements of team work and how to address the challenges they face, enabling the teams to address conflicts and share the work load with one another. This contributes significantly to better collaboration among the teams. Some of the key challenges to collaboration that the activists face are: some activists not keeping time for activities or meetings, some activists not supporting others in activities, and some LCs and senga not being present at community activities. The meeting ended with CSEC teams planning their upcoming events together in order to further strengthen their collaboration and solve the issues they face. The CAs and drama groups shared their monthly planners with the other activists to enable them to take part in their activities with the community. This allows for better collaboration and support among the groups, a significant success for their activism. The groups described how working together allowed them to gain community trust and reach out to more groups of people, strengthening their CSEC prevention activities.