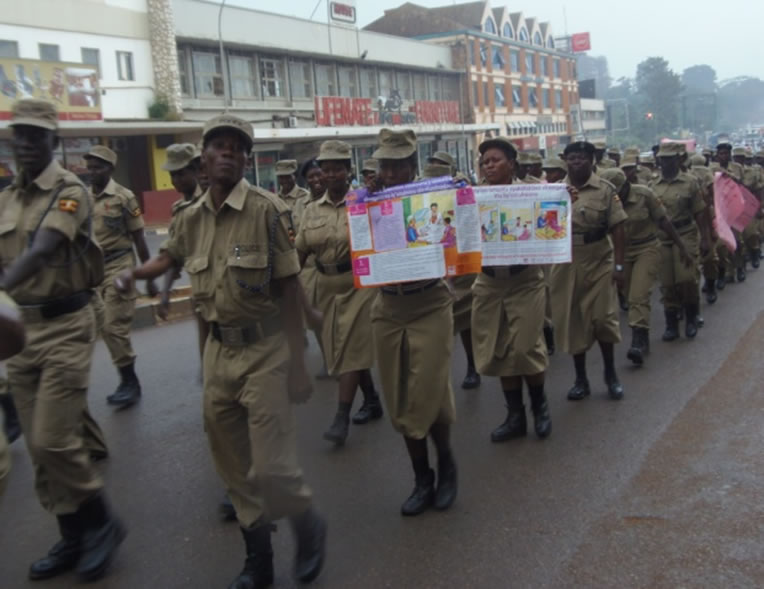 Did you know that on the 16th July, 2014 Uganda Police Force made a public commitment to popularize the Domestic Violence Act 2010 (DVA)?

CEDOVIP in partnership with the Uganda Police Force launched the anti gender based violence campaign with focus on disseminating the Domestic Violence Act using the Domestic Violence Act public vehicle sticker campaign as part of the Centennial celebrations for the Force. Over 750 men, women and youths including senior police officers, members of civil society, students, media practitioners and community activists saw the State minister for Gender, Labour and Social development, Hon. Rukia Nakadama Issanga make personal commitment to have the sticker on her car.
“This campaign is significant in that it brings assurance to survivors of domestic violence that actions will be taken to protect them. Police needs to ensure that laws are enforced.”

The Domestic Violence Act public vehicle sticker campaign aims to raise awareness about the DVA and encourage the public to use the law to keep safe at home. The sticker was also printed in 4 languages including English, Luganda, Luo, and Runyankole-Rukiga. The over 7000 stickers will be pasted on all police vehicles across the country as part of their commitment to prevent and respond to domestic violence.

The AIGP Edward Ochom who represented the Inspector General of Police reaffirmed Police’s commitment to keeping everyone safe at home and remarked that….

“It is very costly to investigate GBV after it has happened therefore it is important to prevent it before it happens. We have enough legislation to deal with the problem but implementation remains slow. This therefore requires that investigations should be expeditious with total commitment, cooperation with all stakeholders and everyone so as to end GBV.”