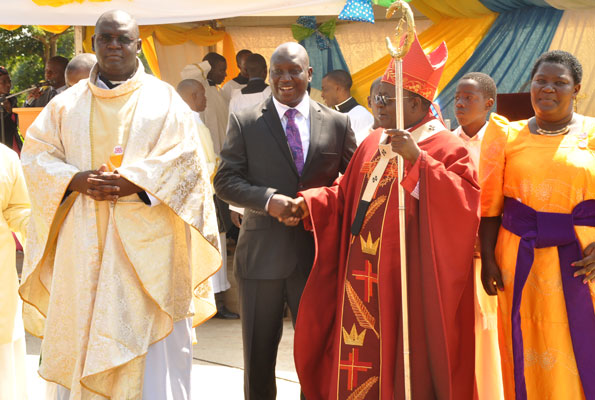 The archbishop of Kampala Archdiocese, Dr Cyprian Kizito Lwanga, has asked government to implement the Domestic Violence Act, 2010, that was passed five years ago to curb the increasing cases of domestic violence.
Dr Lwanga said domestic violence is one of Uganda’s top challenges that needs urgent redress.

Speaking during the installation of the Rev Fr Denis Kizito Ssebunya as the Episcopal vicar for Mitala Maria Vicariate in Mpigi District on Sunday, Dr Lwanga said many Ugandans are suffering because of the many unsolved problems, especially violence in their families.

He asked the government to prioritise the implementation of the Act by carrying out awareness campaigns countrywide and strengthening the capacity of leaders to handle family conflicts.

He said domestic violence has not only shattered families, but also the church, society, as well as the State.
“We cannot have a stable and progressive society when our families are still unstable. This is a very big problem we are facing as a country and we need to address it,” he said.

Archbishop Lwanga said the problem of domestic violence has been worsened by people who consider gender-based violence as a family affair and whenever outsiders such as neighbours try to intervene, they consider it intrusion.

“Our people need to know that there are laws that can help us address this problem which must be used,” Dr Lwanga added.
Government has consistently said it lacks funds to implement the DVA although activists have been at the frontline of advocating for its implementation in vain.