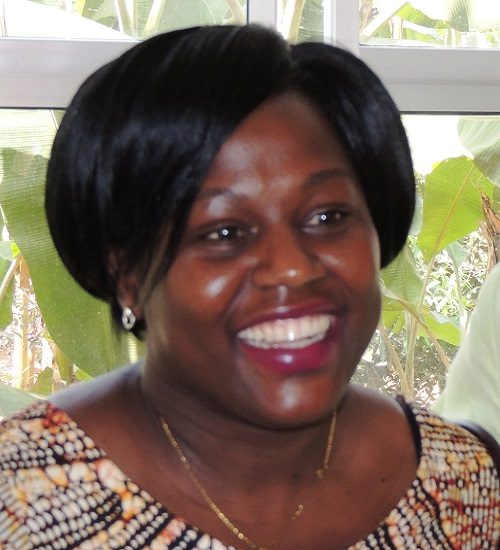 On the Spotlight: Josephine Kamisya

Josephine, who we affectionately refer to as Jojo, is the next Employee Spotlight.Jojo’s big personality fills every room that she walks into. Her easy going attitude and strong values have helped her be one of the employees who has worked in nearly all departments. Jojo is always ready to help or support anyone who calls her, whether it is a co-worker, a community activist or a ssenga. Her support, perseverance and ability to hold people accountable has made her a valuable asset to CEDOVIP’s work with partners, institutions and communities.

Question: Like always, we make sure to start with the basics. What did you study at university?

Jojo: At university, I studied development studies. I got a masters in peace and conflict resolution.

Why did you choose to study those areas?

I chose peace and conflict resolution because it is connected with what we do. When you are addressing violence against women and girls, you must create a violence-free resolution and peace. So we studied how to work with people and how to handle different situations. We learned how to resolve conflict in a peaceful way instead of by using violence.

I had the experience of working in preventing violence against women and girls, but I felt like I needed more skills to master or get better at peaceful conflict resolution. The whole element of violence against women is very complex and takes creativity, knowledge and skills. The course involved promoting human rights across borders, so in domestic, national and international spheres.

What were you doing before you came to CEDOVIP?

I worked with a youth organization called Uganda Youth and AIDS Association. The main aim was to prevent HIV infection among the youth by equipping them with the knowledge about HIV and the skills to prevent getting infected. We also taught youth how to deal with the stigma associated with HIV and we gave a general awareness about the body and reproductive health.

What brought you to CEDOVIP?

I was looking for jobs. When I was working at Uganda Youth and AIDS Association, I was a volunteer. I was not fully employed but I wanted to learn how to work with people and the youth and to know more about HIV. And I had a passion to move beyond that, to blow it bigger. I wanted to work for an organization that not only helped youth but benefited everyone. I was looking for jobs and went to the National Association of Women Organization in Uganda (NAWOU). That organization was the secretariat for coordinating women’s violence prevention activities. They didn’t need staff, but they told me about the Domestic Violence Project, which was the organization that eventually became CEDOVIP. When I first joined, the only employees there were Rose, Dennis, Lori and Dipak and one staff member who left. I had something that really stood out; I had different skill set. I had learned computer skills because I had been writing manual reports as an intern. So I brought that skill to the table.

What is your favorite thing about working at CEDOVIP?

Women’s empowerment. I love to stand for women’s power, to make people believe in themselves and to let women know they are as worthy, beautiful and important as men. It’s great to defend our own rights and others’ rights.

What has been your favorite memory with CEDOVIP?

In the beginning, I was very young, and smaller. I was very inexperienced in violence against women prevention work. So people looked at me and thought, what can this kid do? I turned it around with my other skills and personality. I actually became an inspiration. I talked to different people, community activists, staff, and everyone thought wow. She is young and knows a lot and is very passionate, even bold. People respected me very early on.

They coupled me with other activists who got skilled. The Community Activists and ssengas (traditional marriage counselors) were mostly elderly women who felt and believed they were experienced when it came to intimate relationships. They think they know it all. After working with us, they were shocked and puzzled. They learned that they were not doing the right thing. They realized they were reinforcing violence against women and girls and perpetuating violence. They could still do better to influence women, so they trusted me and believed I could help them change their own and other people’s lives. That made it easy for me to work with other community members. They became my Godparents who would build up the community. All of us knew something. They gave me the motivation and courage and helped me gain trust from the people.

Being able to start doing this work was also great. It was work that everyone else was not so interested in doing. People were afraid of ridicule and rejection and isolation. When we began, people saw us as the problem, like we were breaking families or spoiling women. Through persistence and consistence, people learned we made relationships better, instead of breaking them or encouraging women to rebel. We promote justice and fairness between men and women in domestic settings.

What is one of your proudest accomplishments?

I have worked in all of the departments. Advocacy, institutions, local activism, programming of technical assistance to partner organizations. The fact that I am well-rounded makes me more skilled. My personality has helped me to work with people at different levels. At the community level I fit in. I worked for a while and can mobilize. I can influence institutional changes. Yvette and I have worked with police and health workers. I am skilled at relating to people at different levels through relationship building. We get much further by maintaining respectful relationships between stakeholders.

I make friends so easily and I am someone who is very patient. I hardly get angry and I am selective of word choice. I do not offend people and I make them feel safe. The higher management would meet with me because they are comfortable with me. I am able to make friends and work together with partners as friends.

My other proudest accomplishment was the evolution of the Domestic Violence Act. While we were in Kawempe with communities to prevent domestic violence, there was no law. People would get arrested, but no one cared and violence continued to happen. People wanted a certain change. We made a bylaw on domestic violence in the communities. That was a blessing because it was brought to higher authorities. They said no, this does not have to only be in Kawempe, so they came on board to take it higher. We all felt every Ugandan should benefit. So that turned into the idea of the Domestic Violence Act.

Who is your favorite celebrity activist?

I love our team of activists in Kampala. We are famous in our own way. We made changes and reduced violence against women as the SASA! study showed.

Apart from us, I look up to Sylvia Tamale, the first woman to be Dean in the Law Faculty at Makerere University. She is a strong activist who is passionate about human rights, women’s rights and minority rights, even LGBT issues. She stands her ground, no matter the ridicule, name calling or public shaming. She influences policies that are supportive to promoting human rights and women’s rights, and she keeps advocating rights for minorities.

What color represents your activism?

I say purple. Purple is for peace and calling for promotion of women’s rights.

What is something that people might not know about you?

I like things done straight and fast. I do not like delays so much. I get frustrated when things do not get done quickly. I get tired but still try to push because I have grown and worked with people, so I know how to relate to people. I now know how to mentor someone to get to the level they need to be at which calms me down. Otherwise, if I hadn’t gone through the training and mentoring, I think I would have given up quickly. I used to sit and do the project myself but I realized it isn’t building the capacity of the staff. They would get used to me doing things for them. I learned to put my foot on the ground and say to get it done now or never. I will even carry a computer and sit next to someone to get things moving.