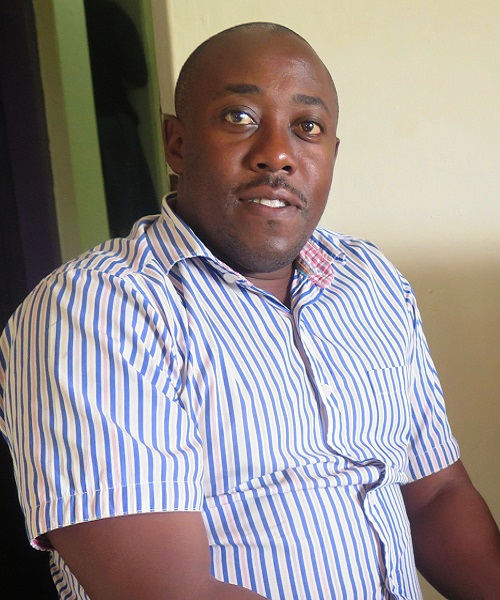 On the Spotlight: Lule Mathew Walusimbi

Mathew is the backbone of CEDOVIP’s technology services, and CEDOVIP would not be able to function without him. Mathew has seen CEDOVIP grow from just six members with two computers to a team of more than 15, each with their own computers, desks and office space. Mathew’s positive attitude and patience makes him easily accessible, something very important for helping the team learn computing knowledge. The team would be lost without him!

Question: I always like to start with the basics. What did you study in school?

Mathew: I studied Computer Science and Information Systems. I majored in Networking.

Why did you focus on those areas?

It came as a personal interest. I wanted to communicate with and design systems. I wanted to make them strong.

Where did you work before CEDOVIP?

How did you come to work at CEDOVIP?

CEDOVIP came to me for my services. I worked as a tech person, first as a part time employee. I came in two times a week or when called upon. That was 10 or 13 years ago. I came to develop financial network systems and train staff. I realized that most of the staff did not have computing knowledge so I had to teach them. I also wrote better computing systems.

Did you always identify as an activist or did you come to identify after working here?

I always identified as an activist. I never would have made it so long if I hadn’t. So many places and societies had so many issues. Areas in our community effectively evolved. It’s always been an inspiration to me.

DId you know CEDOVIP’s mission when you first came here? How did you relate to it?

Yes, I did. When I first arrived, only 6 people were working here, and they mostly did field work. They all became permanent. Their mission was simple, and when you go into the communities, you understand the effect they had. They didn’t come in speaking English. They came into communities ready to relate to people and speak their local languages.

Did you see a big change in yourself during your time at CEDOVIP?

Yes. I understand things in a more positive way. And I also understand that some people need a lot of support. Sometimes they need answers to their questions and they have to understand why they should change. And this service is important in the African setting.

What has been your favorite memory with CEDOVIP?

My best memories are still developing. Since I joined the team 10 years ago, my input has been recognized by people’s way of work. The development of activities has also been influenced by my input.

I remember when I first got here, there was just one laptop and one desk. So there were three or four staff members to one laptop. We still have it. Dpac brought it from the United States and we were all so excited. It was so motivating to the Field Staff. Everyone shared. Seeing the growth has been impressive. Now we have more than 15 laptops so each staff member has their own personal computer. But I still smile when I see that first laptop.

I have also seen changes in the effectiveness of people’s work which I helped improve, though a few have gone. Seeing how much CEDOVIP’s work expanded is also memorable. There used to just be one working area- Kawempe. Now we have expanded all over and outside of Kampala.

CEDOVIP really shaped me to be somebody. It showed me that women can do what men can do and that they deserve equal treatment. In my work, I have even seen how women at work are more receptive and more understanding when I talk to them.

What color represents your time at CEDOVIP and your activism?

Purple. It’s bright and makes everything come out. When I see activists in the community, the color brings the message across well. It was the right color to be used here. I love it. But I have never owned a shirt of that color.

Who is your favorite celebrity activist and why?

Internationally, I would have to say Hillary Clinton and Michelle Obama. They portrayed that women are capable of managing the world. Their message is equal for men and women. They increased international respect for women and children, too. They showed that when women suffer, children suffer too.

Locally I would say Miriam Matembe. She stood with women. She motivated women to realize that they can also be political leaders. She gave them the power to be a lot of different things. Her message was also for women not to underrate themselves. Women in politics should not forget their famlies either. She is an activist, but she is still married, and she still loves her family. She has a phrase that I like. When you are coming home, you must leave work at the door and begin to take up the responsibilities you have at home as a wife, a husband or a caretaker.

I also admire Winnie Kizza Byanima. She is very well respected in Africa because of her contribution to the Women’s League. She gave the courage to stand as women. They can share and they can do what men do. She increased respect for women and children. Now she is even working with Oxfam as the Global Director.

What is something that many people do not know about you?

What people think of me is not necessarily what I am. For example, I am actually very short-tempered. But CEDOVIP taught me to control that. But I also work with lovely people who do not provoke.

Another thing is that I am a very good counselor. I am actually a peer mentor.