MINISTRY OF GENDER commits to have the national GBV POLICY finalized by end of year! 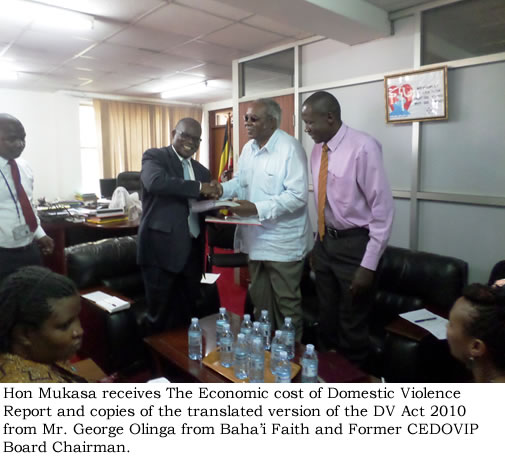 The Assistant Commissioner for Gender in the Ministry of Gender, Labor and Social Development, Madam Maggie Kyomukama has confirmed to the Domestic Violence Coalition that the National GBV policy will be passed by the end of the year 2015!

The Coalition during its submissions before the minister noted that despite the existence of the law, there are constraints and limitations that continue to hinder effective implementation of the DV Act including; 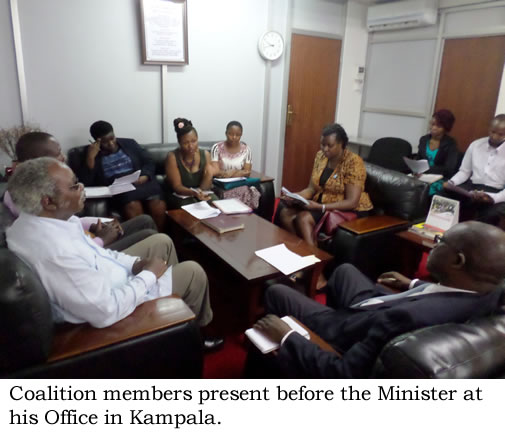 However, the Assistant Commissioner informed the meeting that the process for approval of the GBV policy is in its final stages.

“We have submitted the action plan together with the costing certificate to cabinet. They have been able to look at it but just needs to work on a few things before they are passed. The plan is comprehensive on GBV and fully costed”. Madam Maggie Kyomukama- Assistant Commissioner Gender.

In his remarks, Hon. Muluri recognized the contributions that the coalition has made towards the prevention and response to GBV in Uganda. He further noted that there has been a shift in the attitudes towards VAW/G although the trends have now changed from physical to economic and emotional violence which are equally dangerous. He reconfirmed government’s commitment to have GBV reduced to low levels in the NDP II.

“Budget is a big drawback, personnel is another drawback. We need to put our heads together to attract resources from elsewhere so that the agenda is achieved of reducing violence to low levels.”Hon. Mukasa said.

The minister also recognized the need to focus efforts of economic empowerment of the survivors when the violence stops. 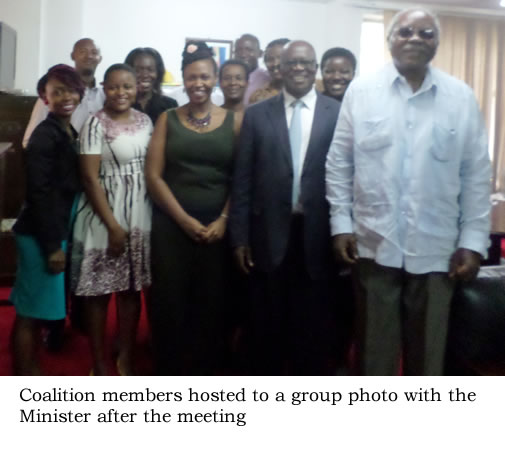 “We need to implement a practical oriented approach so that when a woman graduates from a shelter and the situation at home worsens and warrants a separation, how do we answer to the question of livelihood of the family members without creating dependency and attractiveness to the economic benefits so that victims of GBV don’t appear attractive to others to induce more violence”, He adds.

Hon. Muluri Mukasa is the newly appointed Minster for Gender, Labor and Social Development in the recent cabinet reshuffle by the President early 2015.
During the meeting the coalition recognized the milestones the Ministry has achieved in response to GBV in Uganda and the cordial relationship the Coalition enjoys with the ministry including;
Finalization and dissemination of the National GBV shelter guidelines as mandated by the DV Act.