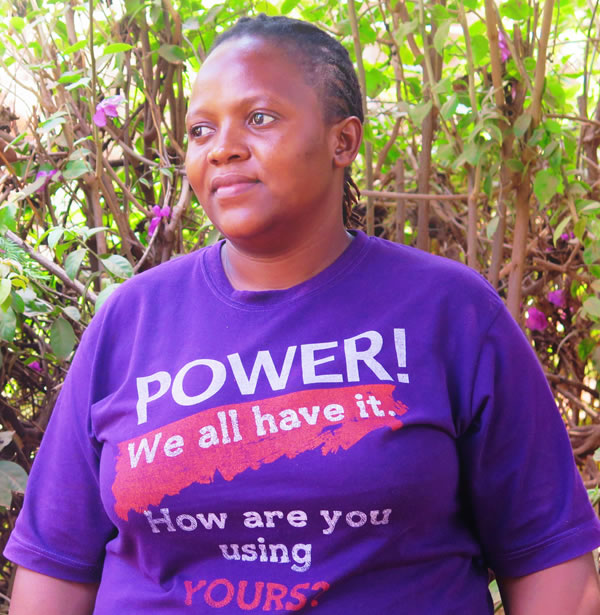 On the Spotlight: Nakirijja Grace Lwanga

Q. What did you study?
At university I studied conflict resolution and peace studies.

Q. What did that entail?
It meant that we were looking at regional level. Africa, East Africa and worldwide. We studied the evolution of conflicts in the world and how those shaped the world. We also looked at who was behind stopping and preventing these conflicts. We looked at key methodologies, how we are benefiting, how to mediate conflicts. Everything from interpersonal to international. We also looked at the laws if we were to mediate so we would know what law or jurisdiction the conflict falls under.

Q. What did you originally want to do?
Well, I have a mixed background. When I completed secondary school, I went for the diploma in business administration (management). I worked in a big organization called MIFUMI doing administrative work. I figured out that I didn’t fit in there, so I moved on to do social work. I was working with young people in and out of school. Along the way in 2004, I made up my mind to go to university. I have always worked on issues of domestic violence. My first work from 2000-2011 was response, majorly with women and girls at different levels. We also did prevention work with children in school. We trained teachers and children on genderbased violence. We worked to make children understand what relationships are. For example, many people who are around children are introduced as Auntie to get their respect. We were helping children understand where auntie starts and stops. Then we were also training adults to understand where children are coming from and why children act certain ways. Also, we ran advice centers for women and girls. We believed that a space without men was the only space where women could confidently report cases. We did counseling, referrals, offered some little support (clothes, transport, court fees). In the long run, we created groups of survivors based on where they came from. We would sample survivor groups to find out if they actually moved on.

That process was called JSEC, which stood for justice, settle, economic empowerment and confidence building. All of these were steps to support survivors of domestic violence. In the justice stage, we ensure that the survivor gets the justice that she wants. Once we won the case, we ensured that she settled in a violence free relationship. If she went back to her partner, we worked with our structures to make sure the partners were violence free. If she left, we helped her connect to programs that would help her become a single parent or go back to her parents. No matter what, though, she needed to settle in a violence free relationship. The economic empowerment packages helped a woman sustain herself. We believed that if women can earn something, they could live to see their decisions working. The type of economic power that we gave women depended on what they wanted to do. Some survivors went back to school, others started businesses, and some resettled. Then finally, the woman needs confidence building support to help prepare her for the community’s response, suspicions or rumors that she might face.

Our organization also had provision services the actual given services. That included counseling, practical support, etc. Protection was given by police and law enforcement. And prevention mostly reached out to young.

MIFUMI also has a national helpline for domestic violence. My work there really influenced my way of doing things and my life as a person.

Q. So how did you find CEDOVIP?
At one time, feminists and activists came together to demand a family law in Uganda that would address domestic violence, inheritance, property rights and things like that. It never materialized, so CEDOVIP took the lead to pull domestic violence from the big bill. The Domestic Violence Coalition Act campaigned for a domestic violence law in Uganda. MIFUMI was a member of the coalition. CEDOVIP invited us, and sometimes helped us with guidance.
By the time I saw the job advert in 2011, I applied. I went through the professional procedure. After interviews, they gave me the job. I came to work in January 2012. I wanted to develop my other side of prevention instead of just working with response.

Q. That is a great way to look at domestic violence work. What is the most rewarding thing about your job?
Letting my spirit and passion grow. It has been very empowering. If you have your passion, you feel that something needs to grow. Nothing can put you down. CEDOVIP helps you let your passion grow and develop. My focus was always on women so I used to be biased against men.
CEDOVIP also helped me address that and understand that violence is never acceptable, regardless of a person’s sex. I also enjoy my work with institutions and growth. It’s great to see how an organization grows with the institutions it works with. You see policies and standard operating procedures change.
It has also taught me to be focused and use good analysis. If you are faced with something, before you even open your mouth, you have to think. And you must be mindful of your language and the words you use. It is important to analyze the sensitivity of the situation and the possible response of the people. I definitely learned that from CEDOVIP. At the end of the day, when you do all of that, people start understanding instead of being confused.

Q. What has been your favorite memory with CEDOVIP?
When CEDOVIP broke through and penetrated the JLOS justice institutions. When I first got here, CEDOVIP used to say that they were too tough and that we couldn’t work with them. I made that my project, and now we can easily rub shoulders with them and train staff.

Q. What color represents your activism?
Green because I believe it means peace. When we are growing up as children, my dad used to say that you should believe in green. Without it you cannot look at the environment or survive. Even when you are dining, you should go for green first. Green is my inspiration. I always think about colors and their meaning too, and green is peace.

Q. What is something that many people do not know about you?
People do not know that I do adoption of children. I take on and help the rejected children. Maybe they were dumped. But I have a running program. Police will now call me and I will  them on to keep them for some time. I have a list of friends who foster and adopt. So after we take on the child, we work out the adoption legally. But I go for the kids who were really really rejected.

Another thing is that I support women who leave their abusive partners. Of course supporting women experiencing violence is important to me. But so is supporting the women who leave. I always support the others, too, but specifically the ones who want to live independent lives and those who want to live with a new partner. I have supported many friends and many strangers to move on. It takes a lot for a woman to make that decision. That is an experience that I have had personally. I was with someone for 10 years. I know I did my best and when I left, I never looked back. Many women fail to make that decision. As long as I live, I will continue to support women who make that decision. Even the young girls, I will give support to.

Thank you for that. They need that support so much; sometimes even more than adults.
What made you take on the adoption program?
When I was still working with MIFUMI, the probation officer came to me. He said that a mother gave birth and buried her daughter. Because her head was not buried, the daughter survived. She was thin and miserable. No one could take her. I really wondered how a human could be rejected by everyone. I think someone always has to take on the difficult children.

He had come to me during the day, so that night I kept thinking about it. I couldn’t sleep and it made me sick. So I began taking the rejected ones. My dad had so many children. Many were not his own. We grew up with so many other children. We managed and we did not know that they were not our relatives until adult. He used to always say that when you do good things for strangers, you are rewarded in heaven and it keeps you growing.

It sounds like your father is your biggest role model. Is that true?
Yes, he is.