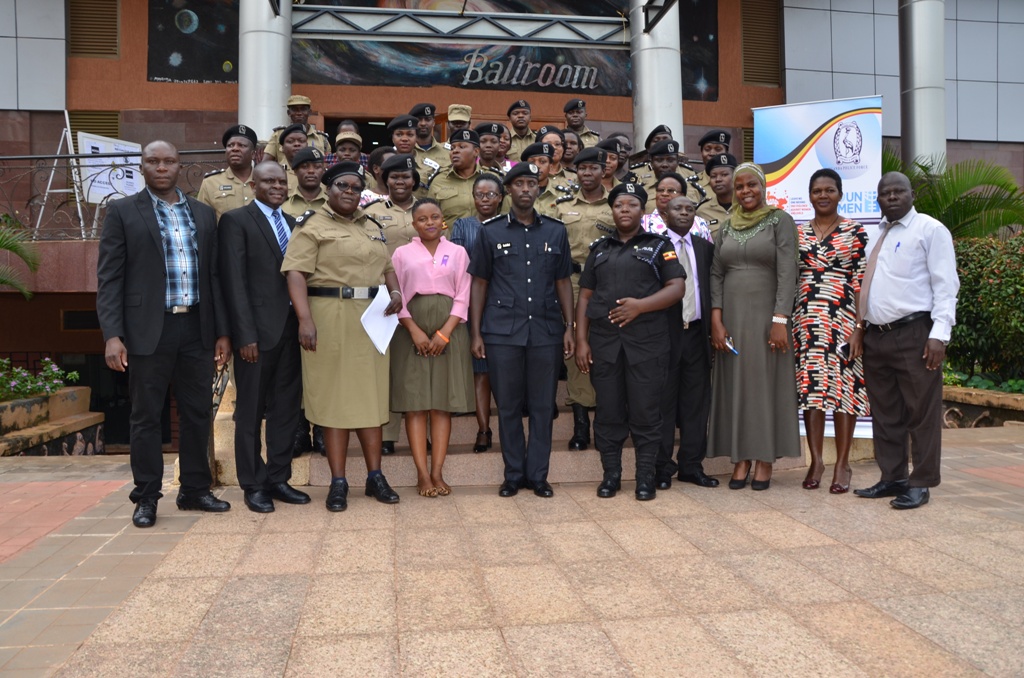 The Inspector General of Police, JM Okoth Ochola has urged Police Officers to observe human rights and fight discrimination of women in the course of implementing their duties.

“The fight against discrimination and by extension violence against women is a national priority with long standing commitment and mechanism to implement the supporting policy and legal framework,” Mr. Okoth Ochola made the remarks in a speech read for him by the Deputy Inspector General of Police Brig. Sabiiti Muzei at the commemoration of 16 days of activism 2018 at Sliver Spring Hotel today.

The theme for this year, “Promoting gender equality at workplace in the Uganda Police Force.” The function was organised by the department of Women Affairs.

Mr. Ochola said as an institution, police has paid particular attention in the development strategy which explains the early integration of women into police for over sixty years ago.

He said the institution has invested in training program for officers, enhanced selection criteria and developing human resource especially for women who now play an important role in the implementation of the strategic Policy plan of the institution.

Ochola added that, “We deeply stress the highest commitment of the institution for the promotion of human right as well as the role of female police officers, by recognising the principal of equally between men and women as a principal of constitutional value entitled in the constitutive Act of our Plan-African organization. ”

Currently the women in Uganda police constitute 17% and it is targeting 30% by interesting women to join the institution.

ACP Esther Akwango, Ag. Commissioner in charge of Women Affairs said, “Today we are holding a conference on gender equity at work place beginning with us (police officers); bring together women in the Force together with champions of “HE FOR SHE” so as to enhance awareness of the gender concepts, identifying manifestations of violence and ways of reducing it at the work place among others”.

ACP Akwango further said the Women Affairs department is looking forward in galvanizing action to end violence against women and girls in Uganda.

During this commemoration, the department is also recommit itself to addressing gender based violence through interesting the Uganda Police Force in the institutional legal and policy framework for better appreciation to ensure effective implementation, breaking silence and increase awareness on the mandate of the department, gender-based violence through various platforms, enhancing capacity in preventing the occurrences of GBVA and providing response services to those who need support, advocate and work with the government and development partners to support GBV policy implementation, continuously use our voices to speak out and defend those affected by Gender Based Violence among others.

The Women Affairs department became functional in 2014 with the objective of building a strong force of women officers dedicated to the transformation of the Uganda Police Force, through the elimination of gender imbalances and the improvement of service delivery. The department therefore identifies itself with the daily struggle of victims of GBV, and further associates with all efforts aimed at ending all forms of violence, to ensure timely delivery of justice to the victims.