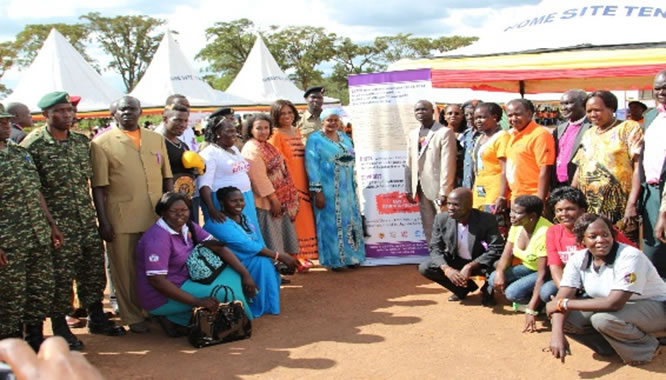 Outcome of the National 16 DAYS OF Activism Campaign

On 25th November 2014, MGLSG popularized a pull up banner for consistency advocacy regarding DVA implementation DVA and as the opportunity to remind policy makers to allocate funds to DVA in order to address needs of survivors of sexual Violence.

The national theme for 16 days of Activism was “Act Now, Stop Teenage Pregnancies Child and Forced Marriages’. The national launch attracted over 1000 people (women, men, youths, girls and boys) and a wide range of stakeholders. CEDOVIP participated in the national launch and highlighted the importance of ministers committing to support the implementation of the DVA.
The space enabled the public to challenge policy makers to act on their unfulfilled actions and directly reminded ministers who committed to support the implementation of the DVA to follow up on their actions.

CEDOVIP in partnership with UWOPA and MGLSD designed the pull banner in which 18 Cabinet ministers endorsed their signatures as commitments to end VAW. During the national launch, the Pull up banner with messages such as “Learn that cabinet ministers 2013/2014 have committed to address Domestic Violence and Rape.

Supports budgets to implement the Domestic Violence Act 2010 was displayed and announcements were made to popularize the Pull up banner. An approach that was used for calling upon the cabinet minister to commit funds to DVA.