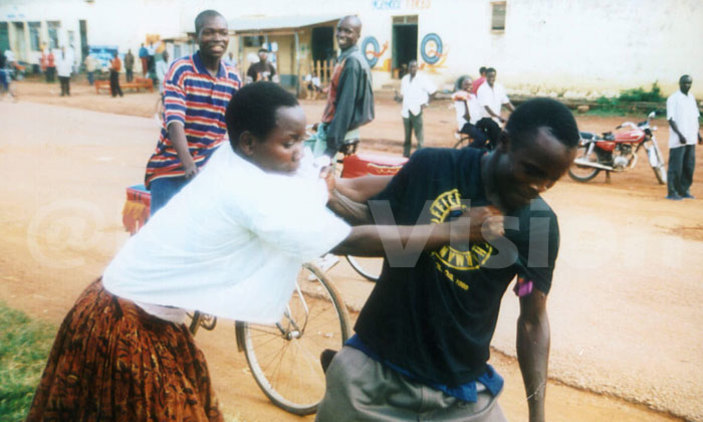 Over sh50b spent to treat effects of gender-based violence

According to the 2011 Uganda Demographic Health Survey, 62.2% of all women and 58.8% of all men aged 15 to 49 reported experience of physical or sexual violence.
PIC: A man drags his wife for a beating while his peers cheer him on (File photo)

Uganda Police, health care providers and the local councils are spending a total of sh50.5b annually in handling effects of sexual and gender based violence, Peace Mutuzo, the state minister for gender and culture has revealed.

She said the money is spent on treatment, legal proceedings, arrests and psychological support for victims.

While addressing journalists during training on gender based violence at the Golden Tulip Hotel on Tuesday, she noted that despite the huge amounts spent, the ministry of gender, the Uganda police and the Ministry of Health have never budgeted for the expenditure instead the money is got through supplementary budget requests.

“It has reached a point where we can no longer just leave it for faith based organisations, for the NGOs, for the development partners. We have to take it up as a country and address it,” she said.

According to the 2011 Uganda Demographic Health Survey, 62.2% of all women and 58.8% of all men aged 15 to 49 reported experience of physical or sexual violence.

The Uganda violence against children survey 2015 indicated that 35% of girls have experienced sexual violence and early marriages.

According to Mutuuzo, in Uganda 35% of adolescent girls between 15 and 19 years are pregnant or already mothers and at least one in 10 girls are married before the age of 15.

“Actually Uganda has the youngest grandmother in the world. There is a young girl in Iganga who is already a grandmother at 38 years,” she said.

Diana Kagere, the Media and National Advocacy Officer CEDOVIP said, large investment and infrastructural projects have made the situation worse in the areas they are being undertaken.

She quoted the suspension of US$256m World Bank loan for road construction in Kamwenge district over claims that workers were sexually abusing girls in the area, and said if social structures are not put in place in such areas, sexual violence is bound to increase in Uganda.

“Labour influx associated with large investment projects, taking place in a context where social values may include high levels of acceptability of GBV can expose vulnerable groups living around construction sites to sexual assault, transactional sex, rape and forced/early marriage,” she said.

She noted that sexual violence leaves serious negative impact on health and overall wellbeing of the victims and Uganda is likely to have a large part of its youth population suffering from post traumatic stress disorder.

Mutuuzo also noted that if this is not addressed urgently, Uganda is likely to breed a society of sadists who find pleasure in inflicting pain on others because they have gone through the same.

Uganda has laws that are against SGBV; they include the Children’s Act, the Land Act, the Prohibition of female genital mutilation Act, the Domestic violence Act and regulations, the Anti-trafficking Act and the employment sexual harassment regulation.

However, Tina Musuya the Executive Director CEDOVIP noted that there is still a lot lacking in terms of gathering evidence, victim’s safety and sentencing.