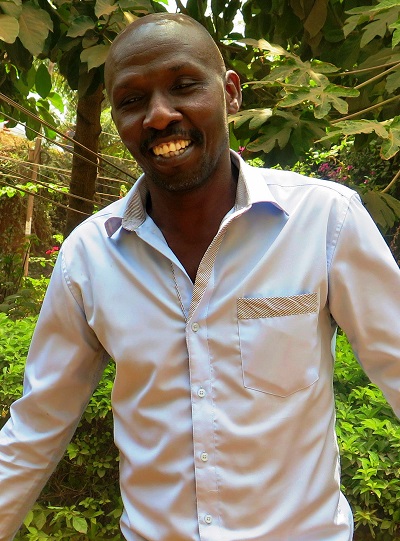 Peter has been CEDOVIP’s master of transportation for 10 years, but he also directly supports staff on their trips into the community. Staff always know that they can count on him. Peter is a thoughtful and intellectual participant of trainings held at the office. He is deliberate in his communications with others, and he articulately promotes violence-free families. His reflective and humble personality contribute very much to the office.

Question: What did you study in school?

Peter: I have a diploma in marketing.

Why did you choose marketing?

From the very start, I was engrossed in the formal sector of marketing. That’s why I was going for a diploma. It was a college of business.

What were you doing before you joined CEDOVIP?

I worked with the Wetlands Project which is within the Ministry of Water and the Environment. I was there for 4 years. Then I spent some time after that in the informal sector. I joined CEDOVIP in 2006 to help the transport section because they had just started it. I have been here ever since.

Why did you choose to work at CEDOVIP?

Well I was happy to take a job, but after I joined, I learned the values. I became engrossed in the message along the way.

I like that CEDOVIP has a history of creating activists out of employees. At what moment do you feel that you became an activist?

After Lori finished writing the SASA! Toolkit, especially after she finished the phases, she would take us through the them. That’s when I started getting into my work and seeing the injustices in our society. I was frustrated with the normalization of violence within our communities.

What has been the biggest change you have seen in yourself?

Originally I was an aggressive fellow. I made rash decisions. I did not look at things objectively before making decisions. I would not say I am completely there, but my work has changed the way I look at issues.

When I look at my family, it has helped me bond more with my children. Originally I saw myself as a provider, and the rest was for my wife. I learned that I was also supposed to be part of the family.

What has been your favorite memory at CEDOVIP?

When Lori finished SASA! and we were going to do the rollout in the community, the Makindye Division came on board. We chose the people we were going to work with and we were given two weeks to do that work. I had to do that work with my colleagues, and we did it well. We got the people, made the selection, and it was successful. I was appreciated. I was given a bonus for the work I had done. That has always stayed with me. Growing up I had never been appreciated. I was just expected to do things, and I was not given credit. Being appreciated was very important to me.

What is your favorite thing about working at CEDOVIP?

The relationship that we have. We are like a family. It is very difficult to know who is who when you come in here. You cannot tell who is the director and who is the support staff. We are a family.

What color represents your activism?

White. For me white symbolizes so many things. First, that what you are trying to do is cleansing. And then it shows that we are all one. When different cultures cleanse themselves they become white and holy and we all become one.

Who is your favorite celebrity activist?

I had not thought about that recently. Earlier I would say the late Hope Turyasingura. She used to work here. The difference between her and everyone else is that she was out there telling people what they were supposed to do.

What else was special about Hope?

She was a lady of charisma and strength. She would tell a person like it is. She spearheaded so many aspects of the women’s movement. You would enter a training hall and never expect her to be so powerful. But when she talked and facilitated, she would give real examples. At the beginning of the day, people would come in with negative thinking and by the end, they would change. She would bring things out of people and change them. We all have a life to live. She was a lady who actually wished no one bad things. She was there for everyone and respectful of who you were. She could fit in with anyone.

What is something that other people probably would not know about you?

On weekends, if I am not traveling, I act as a tour guide. I have been to Murchison, Lake Bunyonyi, Bwindi and those kinds of places.

You get to know a diverse group of people. When you are giving tours, you are not limited to a specific type of people. You interact with people from all over the world. You learn things about other cultures that you did not know. My favorite place to take a person to is Bwindi– the environment itself is very cool. Very natural. It is one of the few places that you can feel has not been tampered with.