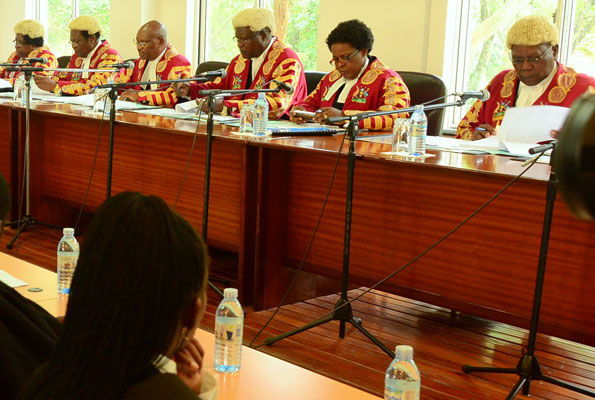 The Supreme Court has ruled that the refund of bride price by the woman’s parents or relatives upon a failed marriage is unconstitutional.

But the same court declined to declare that practice of demanding for payment of bride-price as a precondition for customary marriage as unconstitutional. This means that paying of bride price by the boy’s side to the parents of the girl is to continue.

In a majority judgment of 6:1, Justice Jotham Tumwesigye who wrote the lead judgment observed that it’s unfair to demand a refund of bride price from the woman’s parents after years of marriage.

The judge added that it’s not likely that the parents of the woman would be keeping the property ready to refund.

“ I would declare that the custom and practice of demand for refund of bride price after the breakdown of a customary marriage is unconstitutional as it violates articles 31 (1) (b) and 31 (1). It should be accordingly be prohibited under articles 32 (2) of the Constitution,” ruled Justice Tumwesigye who wrote the lead judgment

Chief Justice Bart Katureebe who was among the six justices who agreed with Justice Tumwesigye, observed in his judgment that the refund of bride process connotes that the woman in the marriage was on some sort of a loan.

The Chief Justice added that even a sale, the cliché is that goods once sold cannot be returned or goods once used cannot be refunded and if that cannot be done in respect of common goods like  cattle among others, it cannot apply to women.

“This to me, refunding compromises the dignity of the women contrary to article 33 (1) of the Constitution,” held Chief Justice Katureebe

The other justices who agreed with the lead judgment were; John Wilson Tsekooko,  Christine Kitumba, Benjamin Odoki and Galdino Okello. On the contrary, Justice Esther Kisaakye gave a dissenting judgment.

The judgment of the court arose from an appeal that Mifumi, a non governmental organization and 12 others lost before the Constitutional Court in 2010.

The Constitutional Court ruled that Mifumi had failed to prove that payment of bride-price causes domestic violence in families as claimed then.

In a majority judgment of 4:1, the Constitutional Court held that there are diverse causes of spousal abuse and that court could not say with certainty that bride-price is unconstitutional on that basis.
From Monitor Publications