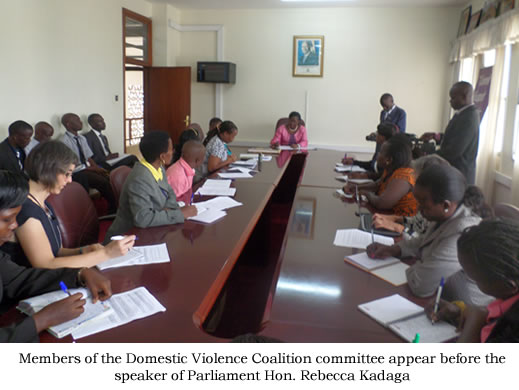 Following the Hon. Speaker’s directive, the Domestic violence Act coalition was invited by the parliamentary committee on Gender, Labor and Social Development on Wednesday 20th August 2014 to present before it recommendations and gaps in the implementation of the Domestic Violence Act 2010.

The committee chaired by Hon. Margaret Komuhangi tasked the coalition to present evidence to show the slow government commitment and gaps in the implementation of the Domestic Violence Act.

The Coalition which comprises of over 25+ civil society organisations was led by Centre for Domestic Violence Prevention, (CEDOVIP) Executive Director, Tina Musuya.

The coalition presented an assessment and review of the sectoral ministerial and budget statements for the financial year 2014/15 for Ministry of Gender, Health, Ministry of Justice and Constitutional affairs, Ministry of Local Government and Ministry of Internal Affairs indicating the following;

“Honorable Members, we recommend that you ask the key sectors/ ministry’s budgets directly responsible for the implementation of the Domestic Violence Act (Gender, Constitutional affairs, Local Government, Health, and Internal Affairs) to show specific budget allocations and outputs of those activities and the outcome of what they have done” submitted Tina Musuya.

The coalition’s presentation attracted the Committee Member’s support who recognizing that domestic violence is the most prevalent crime in the country, agreed to take actionto push Ministry of Gender to show commitment towards Domestic Violence Prevention.

“90% of the crimes in Uganda are domestic violence based yet systems remain ineffective and there is need to bring the cases down. As a Committee we need to demand that everytime Ministry of Gender presents its financial budget, they need to show us how much is allocated to implementation of Domestic Violence Act and state the outcomes of these activities”, said Hon. Margaret Baba Diri; woman MP for Koboko district.

“Honourable members, we need to revoke the certificate of financial implication the Ministry of Gender laid on the table before passing the Domestic Violence Act and scrutinise it and demand that the Ministryof Gender elaborates the details of what was planned and budgeted for. I also request that the Coalition condenses these issues into two key specific recommendations to Ministry of Gender and forward them to the committee by Monday 25th August, 2014”, Hon. Margeret Komuhangi, Committee Chairperson.
The committee is expected to present a report before the house for debate by 30th August, 2014.