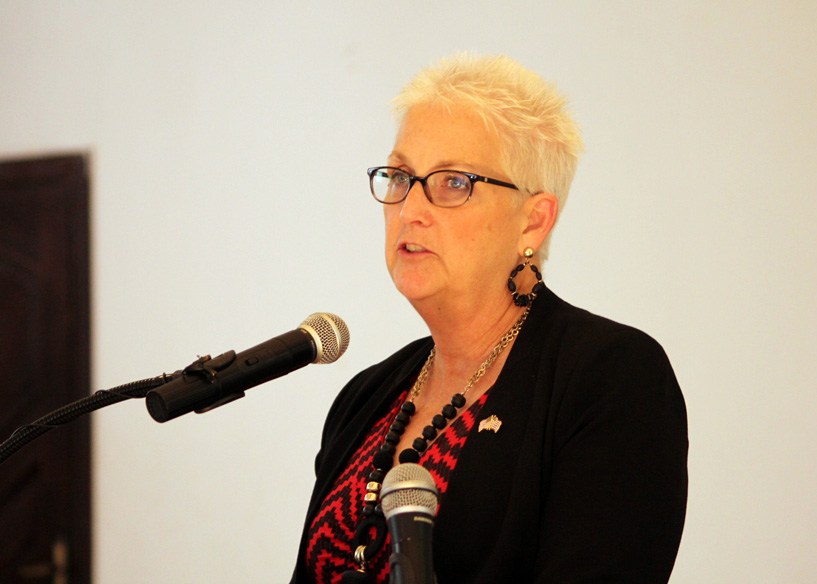 Us Ambassador Challenges Makerere University Students To Speak Out On VAW/G!

The United States Ambassador to Uganda H.E Deborah R. Malac called on the students of Makerere University to open up and seek support when they experience violence since the VAWG could easily ruin their future careers. Giving the key note address during the second MUK Diva safety campaign(https://www.facebook.com/U.S.EmbassyKampala/posts/1505485062834330) organized by CEDOVIP and the School of Gender and Women Studies,

Office of the Vice Chancellor and the Student’s Guild Council as a key event during the 2017 16 days of Activism Campaign under the theme “Every girl Counts! What action will you take to keep girls in school?” Ambassador Malac recognized that although a lot of work is being done to end VAWG globally; there has been little progress on addressing the problem. Using Ugandan statistics she raised concern that GBV was prevalent in Uganda due to the structural gender imbalances.

Making reference to the ‘Me Too campaign’, a global campaign where women are taking a stand and calling out their perpetrators and breaking the silence on sexual violence under the #Metoo hash tag on social media urging students to join in.

“We won’t solve it by simply making it a “women’s issue,” which often becomes code for doing nothing. Gender-based violence is and must be an issue for everyone, including men and boys. Here on campus, everyone has a role to play – whether it’s speaking out against sex for marks and intimate partner violence, making sure the Anti-Sexual Harassment policy is enforced, or getting involved in the Anti-Sexual Harassment Committee. I urge you all to take whatever steps you can to make your campus a safe space for everyone – and for you to carry those values back with you to your homes and communities.”

Ambassador’s full speech during the event can be accessed here (upload Speech in resources for media and add link here)
The MUK DIVA safety campaign is a dialogue organized by CEDOVIP with support from Oxfam and UN Women partnered with the 83rd Guild Council of Makerere University, the School of Women and Gender Studies (SWGS) and the United States Embassy that aimed at;

i) Raising awareness on the violence that young women and girls experience in and around the University campus.

The dialogue was attended by Makerere University leadership, the students’ guild council, student community, University police, teenage activists (Kisugu and Komamboga health centers), civil society organizations, and donors, school of women and gender studies, and service providers. Using the 2017 16 days regional theme of “Every girl counts, what actions will you take to keep girls in school” the participants recognized that VAWG is prevalent at Makerere University and a serious problem that manifests in different forms.
Students Commitments:
Students committed to the following actions to keep girls safe in school:;

• The students vowed to break the silence and report any incident of violence against girls to any authorities for action.

• Support girls experiencing violence by referring them for further support to service providers of GBV.

• Talk to their friends and peers to let them know that violence is not acceptable; it is a crime and violation of one’s human rights.

University Commitments:
The Dean of the School of Women and Gender Studies (SWGs) informed the students about the sexual harassment policy and encouraged students to report all cases of sexual harassment by male lecturers or male students to the relevant authorities such as police, the university guild and the Dean of School of Women and Gender Studies.
In his remarks, the Deputy Vice Chancellor (VC) called for implementation of activities to raise awareness about in all the colleges of Makerere University. The Deputy Vice Chancellor assured the participants that the university leadership is committed to popularizing and implementing the sexual harassment policy, so far in the last one year, the university management had punished 3 lecturers for sexual harassment crimes. The university has since instituted a student’s disciplinary committee to address the same. The VC requested CEDOVIP to support the university to incorporate VAWG in the curricula of all courses offered at the university to ensure VAWG is mainstreamed into the university activities.
Students made public commitments with the guest of honor through the photo boards that had key messages calling upon communities to focus their energies towards positive change, to commit to prevent violence against women and girls and inspire them to support survivors of violence.
More pictures from the event can be accessed here (add link to folder for Muk Event).