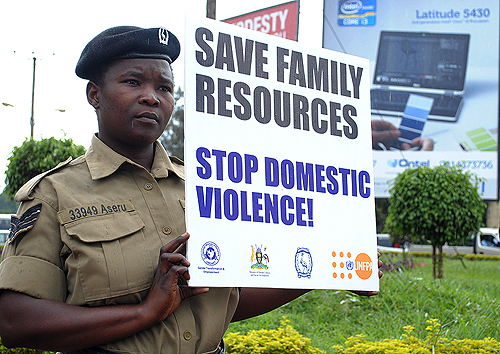 Kampala. Escalating cases of domestic violence during the political season are hindering women’s participation in the democratic process and becoming costly to families and country, activists said yesterday.

Women activists, under their local charity, the Centre for Domestic Violence Prevention (CEDOVIP), warned partners against violent acts resulting from divergent political views that couples hold ahead of the 2016 general election, arguing that it is an indication of gender inequality and social injustice.

“Cases of domestic violence usually escalate as a result of elections where one partner supports a different candidate or party from their loved ones. This has sparked off fights and separations and increases vulnerability to economic development in a family,” said Ms Diana Kagere Mugerwa, the programme officer in charge of national advocacy at CEDOVIP.

Addressing journalists in Kampala at the launch of the 16 Days of Activism campaign to end violence against women, Ms Mugerwa appealed to candidates vying for elective posts to be gender-sensitive and balanced while making pledges or giving gifts during the campaign.

The activists said despite the existing laws, domestic violence continues to happen with impunity.
“We call for real action and the leaders to strengthen the national coordinating mechanisms with sufficient authority and budget to develop, implement and monitor actions to address violence against women,” said Ms Tina Musuya, the CEDOVIP executive director

198
The number of people killed as a result of domestic violence, according to The 2015 bi-annual report of the Uganda Police Force released in June.
From Monitor Publications