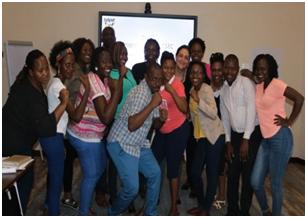 Women rights activists under the Domestic violence act Coalition coordinated by CEDOVIP and women members of Parliament under UWOPA launched their 16 days campaign 2017 with a press conference at the Parliamentary lounge where they demanded for accountable male involvement in programs to address gender inequality.

In the press statement read by the Chairperson UWOPA and woman Representative Kumi district, Hon. Monica Amoding noted that the national theme focused on the role of men in ending violence against women and girls and noted that involving men and boys as partners to achieve women’s empowerment and gender equality is an important component in violence against women and girls prevention. She however emphasized that critical concerns have developed about the lack of accountability to women and girls among this body of work.

Concerns:
The statement further re-emphasized the need to focus on retention of girls in schools by addressing structural discrimination of girls throughout the education system right from the home, the school setting, and government policy that impact girls access to education and their experience.
Currently in Uganda women and girls face violence at alarming rates. Reports indicate that:

• 75% of Ugandan girls are sexually abused during their childhood
• Uganda ranks16th among 25 countries with 16% are married off by the time the age 15 years and 53% by the age of 18.
• 59.6% of women from the age of 15 have ever experienced physical violence.
• 39% of women have experienced sexual violence compared to 11%of men.

Violence against women and girls remains epidemically high in Uganda and hinders social and economic development, it prevents girls and women’s equal participation at social, economic and political level, it is extremely costly to families, communities and nations, and it is a profound symbol of gender inequality and social injustice. Additionally, it is a public health concern; increases woman and girls risk to poor health and a driver for HIV/AIDS.

Demands:
They thereforecalled for action and demanded that;
1. Ensure all girls are enrolled in school remain in school till they complete higher level of education therefore:
• The ministry of education to remove policies that promote expulsion of pregnant girls and introduce support and care structures for such girls in schools, technical institutions and universities that will enable them to continue with their education.

• As girls go to school, parents/guardians and community members should eliminate safety hazards they face including sexual harassment within the transport sector, at home and school environment, rape, kidnapping and providing separate toilet facilities for boys and girls at shcool.

• Parents should remove barriers such as: marrying off young girls for material gain, provide scholastic materials as well as sanitary towels, reduce the domestic work load for girls to enable them have more time to concentrate on their education.

2. Effectively punish parents and teachers who sexually harass and abuse their children by revoking their teaching licenses.
3. Challenge the systems that reinforce negative stereotypes and power imbalances faced by girls. Ensure the curriculum and text books encourage and portray gender equality.

5. Male allies must demonstrate good faith and speak out. Speak out against the marginalization of women and girls in policy and programs. When there is a genuine critique advanced about the nature in which an ally, including male colleagues and partners, is undermining work to address VAWG, male engagement groups need to dedicate energy and resources to meaningfully engage and challenge these critiques. Accountability should not be a responsibility of women rights organizations s and women’s movements.

Every November 25th – December 10th, the International campaign against violence against women and girls (VAWG) unites activists, organizations and individuals across the world to raise their collective voices during the 16 Days of Activism Campaign against violence against women and girls. 2017’s National theme is From Peace in the Home to peace in the Nation: Male engagement for the safety of women and girls! Over the 16 days period the Domestic Violence Act Coalition engaged the communities under the national and regional theme; Every girl counts, What action will you take to keep girls in school?

January 2018, CEDOVIP with the GoU-Irish Aid Joint Programme partners spent time exploring and strategizing on ethical steps of to exit that prioritizes sustainability of the achievements of the work. The Joint Programmethat started in 2010 is ending in late 2018 which calls for careful and thoughtful steps towards exiting the communities of Busoga.

The long term outcome for the ethical exit is for District Local Governments taking lead in VAWG prevention through planning, budgeting and allocating funds towards implementation of activities to prevent and respond to GBV. Additionally, District Local Governments are expected to sustain efforts towards preventing and responding to GBV as defined in the National GBV Policy.

The trainingfacilitated by a child Protection Specialist from United Kingdom, Sadia Mahmund Marshall was designed to equip staff with theoretical and practical skills to prevent violence against women and girls as well as define prevention strategies for CSEC under the SASA! work. CEDOVIP staff also visited other identified organizations working on CSEC to share experience, build relationships and learn more about best strategies for working on CSEC, challenges, areas of operation among other things.

This is part of the Strengthening Uganda’s Response to Gender Equality (SURGE)program funded by DFID UKaid. CEDOVIP is one of the key implementing partners under the SURGE program. CEDOVIP’s role under the SUGRE program is to prevent violence against women, Female Genital Mutilation in Moroto and Kween and Commercial Sexual Exploitation of Children in Kampala using the SASA! approachas well as to provide technical assistance to Action Aid International-Uganda and Mifumi Project to strengthen their VAW prevention programming based on the SASA! model in the three (3) districts of Kwen, Kampala and Moroto.
More pictures can be accessed here (Add link to staff training folder)