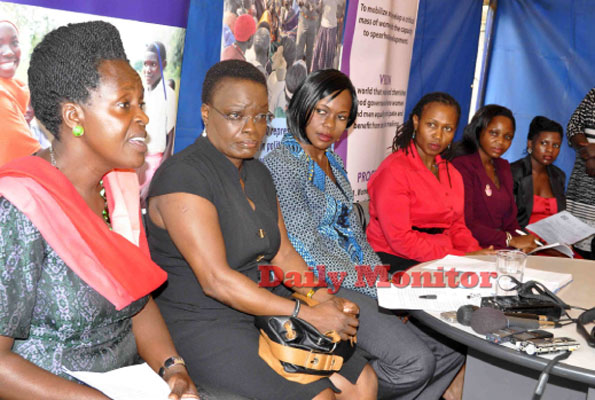 Women to demonstrate over police brutality

KAMPALA. Women activists plan to hold a peaceful demonstration following an incident that saw FDC’s Fatuma Naigaga undressed during police arrest last Saturday.
Under their umbrella body, Women’s Democracy Group, the activists said the act by police is deliberate and pre-planned against women interested in leadership.
“The police spokesperson, Mr Fred Enanga, said Ms Naigaga was a harlot who stripped on her own. The question we are asking is, if a person is a harlot, does it make her less of a woman?

“Police either has a hidden agenda or they are sex hungry,” Sarah Eperu, the FDC’s Womens League spokesperson, said during a media briefing yesterday. As a result of police brutality against the Opposition, recruitment of new officials to the party becomes hard and women involvement in democracy issues keeps on declining, she added.

Against this background, former minister of Ethics and Integrity Miria Matembe, called for a peaceful demonstration against the act.

“We used to demonstrate against rape, gender-based violence and other things. Why not hold one against undressing of women? The moment Ugandans get out of their homes and hold a peaceful demonstration, maybe then they will listen. Women across East Africa should join us as we fight this,”Ms Matembe said.

According to the chief executive officer of the Uganda Association of Women Lawyers, Ms Irene Ovonji Odida, one wonders whether Ugandans are citizens of a democracy or subjects of an autocratic government following police brutality against the Opposition.

She added that they have have filed a case against the individual police officers involved in the arrest.
The women also asked police to issue new guidelines for making arrests. Currently, the Criminal Procedure Act states that in making an arrest, the officer can ‘touch or confine the body of the person to be arrested unless there is submission to custody by word or action’ by the person being arrested.

The Act further stipulates that if there is resistance to arrest, the officer making the arrest “may use all means necessary to effect the arrest.”
However, “Nothing in this section shall be deemed to justify the use of greater force than was reasonable in the particular circumstances in which it was employed or was necessary for the apprehension of the offender,” Part II of the Act states.
From Monitor Publications